We tend to think that illnesses or physical traits are static and unchanging and even, perhaps, genetic in origin. However, numerous cases of people diagnosed with multiple personalities indicate that the mind – the thoughts and beliefs – may have more control over illnesses or traits than we generally assume. 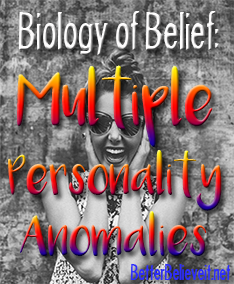 Frank Putnam is a psychiatrist at the National Institute of Mental Health and a leading researcher in the field. “Multiples exhibit some remarkable medical phenomena.” Dr. Putnam said. He talks about one patient who reacted normally to a sedative drug in one personality, but was totally unaffected by it in another.

Dr. Bennet Braun is a doctor who treats multiple personality patients at Rush-Presbyterian-St. Luke’s Medical Center in Chicago. “Some multiples carry several different eyeglasses, because their vision changes with each personality,” he said. Dr. Braun reports the case of a young woman who in one personality was colorblind for blue and green, a problem that ended with the successful treatment of her multiple-personality condition. Another woman, admitted to a hospital for diabetes, baffled her physicians by showing no symptoms of the disorder at times when one personality, who was not diabetic, was dominant. A young man was allergic to citrus fruit in some personalities, but not in others.

In 1986, Denson-Gerber reported on two patients who exhibited spontaneous skin stigmata that appeared in one personality yet disappeared in another.  One patient developed needle tracks on her skin which showed when she was in her drug-addicted personality.  Another patient would have welts and marks show up on his backs and legs when he had flashbacks of prior physical beatings. (Denson-Gerber, 1986).

F.W. Putnam reported that, out of 100 multiple personality cases he studied, 26 of them displayerd allergies in one personality that were non-existent in another personality. (Putnam et al, 1986).

The point is that within one body, two or more distinct personalities can directly alter the body’s physiology depending on who is “in charge”. This is proof that our minds control our bodies. Proof that it is possible to change our physiology with our thoughts and beliefs. Proof that we can cure ourselves of ailments if only we can change our beliefs. The multiple personalities who believe they have a certain allergy do have it, even though their bodies alone don’t necessarily react to the allergen.

He goes on to define this kind of belief:

People with DID don’t just believe they do or don’t have an allergy. They know it. Knowing something is the deepest level of belief, and it’s not easy to change, sometimes even in the face of evidence to the contrary of that supposed knowledge. You can believe anything, no matter how ridiculous it may seem to others, and if you believe it to the point where you know it’s true, it will be true for you. Reality is subjective. But the subconscious mind is tough to change, even tougher to fool, so if you consider a belief like elephants can fly, or two plus two equals five, you won’t be able to convince yourself of it no matter how hard you try. You’ve never seen evidence of it or even a valid supporting argument, and every shred of evidence and logic you’ve ever known has shown that it is impossible for elephants to fly, and impossible for two plus two to equal five.

So it is with your allergies, eye color, or any physical manifestation you can think of. They’re all deeply ingrained in us to the point that we know we have or do not have them. Thankfully, with allergies and other physiological issues, the belief of their existence is not on as deep a level as the very obvious, basic beliefs that elephants cannot fly and two plus two equals four.

This phenomenon of changing your physical reality by changing your beliefs reminds me of the story of Anita Moorjani who had stage 4 lymphoma.  She was in the hospital, her organs were shutting down, her lungs were filled with fluid, and she died.  She had a near-death experience which she describes in her book Dying To Be Me. She said that her intense fear of cancer caused her cancer, and love (and letting go of fear) caused her to become cancer-free.  Whether you believe in such accounts is up to you, but her medical history is well recorded and verified.  She did become cured of end-stage terminal cancer without going on a raw food diet or taking certain herbs or holistic remedies.  Her traditional cancer treatments had not worked.  In my personal opinion, I tend to believe her account that switching from fear to love had an effect in her healing because I’ve come to know about thye amazing power of our minds, even on our physical bodies.