What you say to yourself has everything to do with how you experience people or events, how you perform, and how you feel. We all know intuitively that positive self talk is good for us and negative self talk is bad, but what does science say about the way you speak to yourself? Here are ways you can improve your life by changing your inner dialogue. 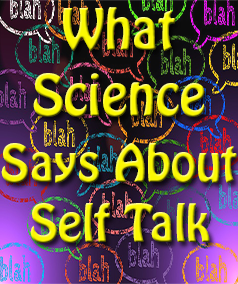 Refer to Yourself in the Third Person

Psychologist Ethan Kross from the University of Michigan performed a series of experiments to determine the effect of a person’s self talk on their behavior.  One of the discoveries he made is that when you use your name when talking to yourself (instead of saying “I”), you:

When you address yourself in the third person, you’re creating a sense of emotional distance from yourself.  You can take a step back and observe yourself more clearly, and you tend to be more rational and treat yourself more kindly.  As an example, one of the experiments involved a group of volunteers who were asked to give a speech with just 5 minutes to prepare.  Some were told to use the word “I” when they talked to themselves, while others were told to either address themselves as “you” or by using their first name.

Kross says that people who used “I” had a mental monologue that sounded something like, ” ‘Oh, my god, how am I going do this? I can’t prepare a speech in five minutes without notes. It takes days for me to prepare a speech!’ “1, 2

People who used their own names, on the other hand, were more likely to give themselves support and advice, saying things like, “Ethan, you can do this. You’ve given a ton of speeches before.” These people sounded more rational, and less emotional because it’s almost as if you’re talking to a separate person.  It’s often easier to be kinder to an outsider than it is to ourselves.

The use of positive affirmations (e.g., “I am strong and capable”) is not new, and they may seem like a bunch of New Age hogwash, but science has studied them, as well. Psychologists Clayton Critcher and David Dunning of the University of California at Berkeley have found that using such statements serve to cushion ourselves from negative criticism from the outside world. They also empower people to stand up to outside threats, as well as persevere during difficult situations.

Several other studies have demonstrated that these positive statements improve performance in both sports activities and in the workplace3.  Athletes who told themselves motivational statements (such as “I can do it”) scored better on strength and endurance indicators than those who didn’t use affirmations.  Affirmations don’t work by tricking you into feeling good, though.  Instead, they work by widening your perspective of yourself and by minimizing your natural defensiveness.

Use Instructional Self Talk to Improve Technique

While many studies have shown that positive self talk improves performance and enhances emotional states, other studies show that the positive words you use must be relevant to the situation at hand and focus on a desired feeling.  The more specific you are, the better the results you get.  In one study, basketball players were divided into two groups.  Some of them used positive self talk using the word “relax” while others used positive self talk using the word “fast”.  Then their shooting ability was studied.  Those who used the work “relax” scored far better than those who used the word “fast”.  “Relax” implies the player will be better able to focus on his task and control the shot better.  If you use self talk that focuses on a desired feeling, performance improves more than just focusing on other positive statements5.

Tips To Improve Your Self Talk

Make an effort to stop and notice which words and phrases you’re using in your internal dialogues.

Most of the time we don’t even notice all the stuff we tell ourselves throughout the day.  If you don’t think you can remember to take time and notice, put a rubber band on your wrist for a day as a reminder.  Throughout the day, everytime you look at it, take inventory of the thoughts running through your mind.

Let Negative Self Talk Pass Through

Negative self talk happens. But when you notice it, don’t fight it. The more attention you give to it, the longer it will stick around. Instead, gently notice it, choose a more positive thought, and just let the negative ones pass through.

Choose a Couple Power Phrases That Inspire You

Since a lot of our self talk goes unnoticed, pick a couple power phrases to use when you’re getting emotional or find yourself in a stressful situation. Examples include “I’m the Man!” or “You go, Girl – you got this!” Saying your catch phrase repeatedly can trigger you to remember to filter out the negative self talk and focus on the positive.

1. Why Saying is Believing – The Science of Self Talk (NPR)

2.Self-Talk as a Regulatory Mechanism: How You Do It Matters

3.Thought Self-Leadership: The Influence of Self-Talk and Mental Imagery on Performance

4.Function and Preferences of Motivational and Instructional Self-Talk for Adolescent Basketball Players

5.The effect of self-talk on a basketball shooting task