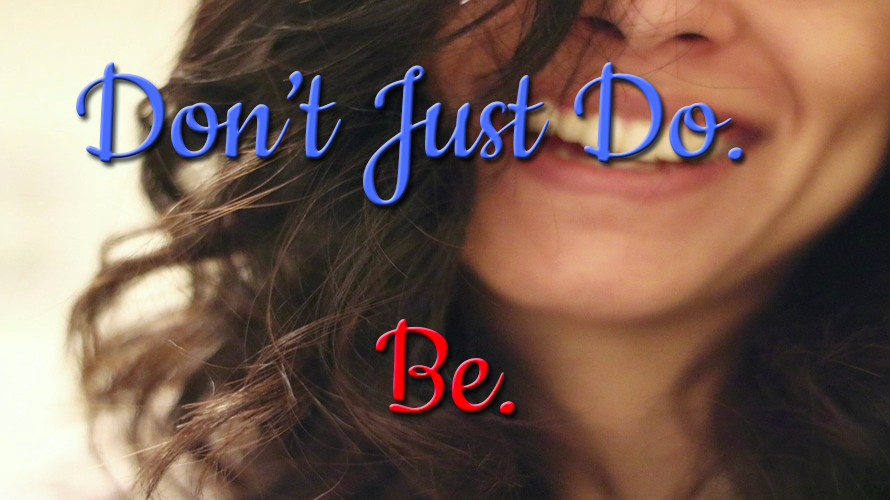 Life can be hectic. For many people, from the time they wake up until they lay down to go to sleep, they run around doing things. They run from one task to the next, often performing several tasks at once. People often define themselves by what they do. If I ask myself, “Who am I?”, the answers are probably mostly things I do. If you asked anybody who they are (how they define themselves), answers might include things like “I’m a bus driver”, “I fix cars”, “I raise 4 children”, “I paint”, etc. Doing is great, don’t get me wrong, but people should focus more on being. When you focus on being, life becomes way more rewarding and less stressful. 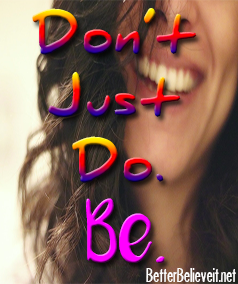 Let me illustrate the difference between doing and being by providing an example. Let’s consider the state of loving. Now love has many different definitions, so we’ll use what I consider love to be. Love in its pure state is unconditional. It never relies on some condition to exist. If it does, then it’s not real love. And of course, love is associated with positive qualities like patience, acceptance, absence of judgement, kindness, giving, and empathy, to name but a few. It is not easy to define, but when you feel it, you know it. It makes your heart soar and elevates your whole state of being. 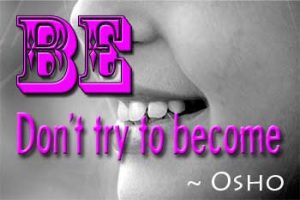 Let’s look at Sue, whose friends all describe her as a loving person. Sue gets up one morning and drives to work. When she gets to the office, she decides to walk a block to get a coffee at the local Starbucks. She sees a homeless man begging on the sidewalk. She reaches into her purse, pulls out a $5 bill and hands it to him. While she’s doing this, she’s judging this man and resentful that he has “burdened society.”. As she hands him the money, her thoughts are full of statements like, “He’s a lazy bum who doesn’t have to work hard like me. He’s probably just going to take this money and waste it on booze. I can never say no when people ask me for things, so why does God subject me to lazy no-good people like this who take advantage of my good nature?”

When she gets back to the office and starts work, her boss comes up to her and tells her that Sally called in sick. He knows she’d be happy to take on the sales report that Sally was supposed to make today.” Sue nods her head, takes the paperwork, and sits down to start working on it. For four hours, she’s angry and grumbling to herself how unfair it is. “Sally’s probably not sick. She just didn’t want to face this mountain of work today. My boss always asks me when there are other people here he could ask. He’s such a jerk”.

After work, her daughter-in-law, Rose, stops by to visit. Sue has collected a bag of clothing to give her as a gift. Rose accepts the bag of clothing and takes it and sets it by the door to pick up in her way out. But Rose was chatting away, preoccupied with her latest project, and she neither acknowledged the gift nor said, “Thank you”. At that point, Rose started feeling angry. “I spent my hard-earned money on those clothes and she can’t even say ‘Thank You’? Why do I waste my time and money on all the ungrateful people in my life? She could at least acknowledge what a thoughtful gift that was. Instead, she didn’t even seem the least bit interested. She didn’t even take the time to open the bag and admire them!”. 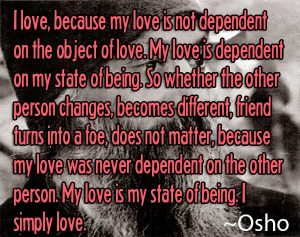 So does Sue act loving? By all outward appearances, yes. She gives to the homeless, she takes on extra work in the office, she spends her hard-earned money to buy presents for her friends and relatives. And her life is full of other examples so that people who know her say she’s a loving person. But is Sue being love? Does her heart swell when she does loving things? Is she elevated and filled with a warm feeling? No. In fact, her state of being lowers as she ruminates on her judgments, opinions, and negative self talk. At the end of the day, she feels exhausted, worn out, and even like she was taken advantage of. Is that love? Sue is not being love. She is doing love.

So who cares if you just do something without being it?  Most people won’t.  But you should.  And people who have your best interests at heart will care because being defines you.  Being makes life easier and more rewarding (if you choose to be something positive and uplifting.  Life will probably not be more rewarding, easier, or fulfilling if you choose to be dishonest, vengeful, etc.). Being is the one thing you get to take with you when you die (in my opinion).  You don’t get to take your car, your family members, your money, your degree.  But you do get to take your love, your compassion, your values, etc.  When what you do is in accordance with what you are, you feel at peace.  You feel balanced.  There’s less angst and tension to carry around.

If you’ve ever read Neale Donald Walsch’s books, he touches on being.  He says the correct order is Be – Do – Have. People tend to think they need to have something or do something first in order to be something, but that’s backwards.  For example, “If I had more money (time, youth, support, fill in the blank ____), them I’d be happy (peaceful, in love, etc.)”.  You can read his thoughts on the matter here.

Take a few minutes and open up a blank text document on your computer. Choose today who you want to be. Think of all the qualities you want to be, and write them down in a list.

Next, define those qualities because you need to be clear on what they mean to you.

Let’s stick with love. I say I want to be love. What does that entail? To me it means that I give because it is who I choose to be, NOT because I expect thanks in return or gratitude or anything else. It means I will have patience for people, even when they’re not doing what I think they should be doing. It means I will let people be who they are and travel the path they are on without judging their actions or inactions. In fact, I choose not to judge them at all, even when they are judging me or being not very nice to me. It makes no difference to me what they do or don’t do, because I’m not being loving in order to get something in return. I’m doing it because it’s who I choose to be.

You can be without doing anything at all. But once you become something, the doing unfolds naturally. It’s not an effort or a struggle. It’s just a natural expression of who you are. And when you act in accordance with who you are or in line with what you truly value, the universe conspires to bring you greater gifts. What comes from within gets manifested outside in the world.

You can have 2 people who have similar circumstances in life, yet one is thriving while the other is struggling. They have similar educations, they live in similar neighborhoods, have similar family structures, etc. The difference between them may very well be because one is living according to how he defines himself while the other is not. The one who is struggling may well be acting against his core values, which creates internal angst and outward chaos and problems. The opposite is true for his counterpart.

So you have your list of qualities that you choose to be, and you have defined exactly what that means to you. At the end of each day before you go to sleep, take 5 or 10 minutes to review the events of the day. See where you chose to be that which you have defined yourself to be. See where you didn’t quite act in line with who you are. See how maybe you could’ve thought or acted differently. Do this regularly, and before long you will truly be living the life you have chosen for yourself.  And next time someone asks, “Who are you?”, you definitely know the answer, because you made a choice and followed through on it.