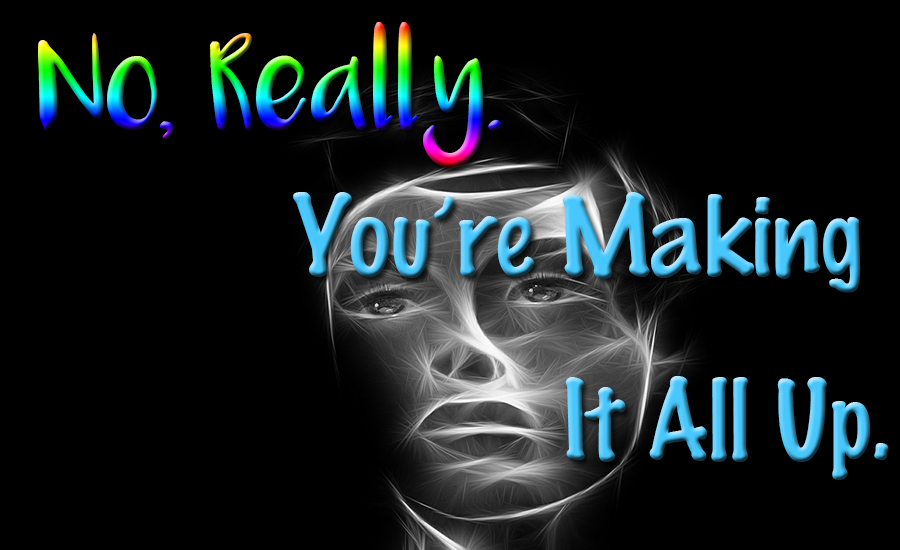 You can never know reality because you project the world “out there” and you see what you want to see. I’m sure you’ve heard that idea stated in different ways at various times in your life. Most people take it at face value and immediately think, “Yeah right. I know better. Go jump off a cliff”. But what if it’s true that you’re just making it all up? What do people mean when they say that you’re just making it all up? 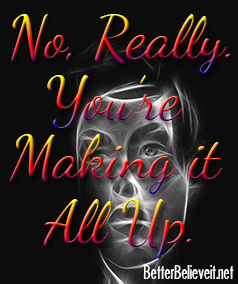 At first glance, it seems absurd. I’m walking into this office building. I did not make up the existence of this building. Strangers are coming and going from this building. I push the elevator button, and soon an elevator appears, as it has done in countless other buildings I’ve been in. All the people here seem to see the building and experience it as I do, right? I’ve seen the building’s picture in a magazine, and the picture looks exactly like how I see it. Surely it looks the same to me as it does to others. Any strange odors are sensed in a similar way by other people near me. No one would argue that the wall feels hard and strong. The same goes for everything else I encounter in the world every day.

However, you can only experience anyone or anything by what comes in through your five senses, and before your brain registers any of the sensory data coming in through your receptors, it first filters it through your memories, experiences, thoughts, beliefs, and feelings. Only then does it “make sense” out of the incoming data where it can then organize it and store it. Everything is perception. 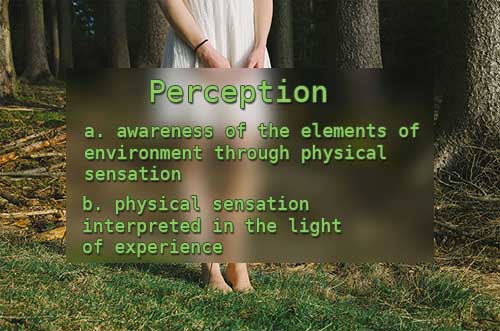 Well, duh! Everyone knows that, right? Based on my experience, I’d have to say “no”. Maybe they know it, but they often fail to delve deeply and see how profoundly affects every aspect of each of our lives.  Often, it’s not apparent that what we see, hear, feel, touch, or taste is a filtered experience.  The opinions we hold  about the people we know  are just opinions that are based on the stories we tell ourselves about that person.  Those stories are based on our past experiences (and the stories we made up about those), the focus of our awareness, the assumptions we make about what that person thinks or why (we believe) he acted a certain way.  It’s all made up by us in our minds.  Your perception of a person, place or thing is colored by your mood at the time, as well.  Every bit of sensory data you experience is filtered in this way.

The problem is that people believe their perceptions are absolutely factual and correct.  However, if you look and see how much you’re making it all up, you can find the biggest personal freedom there is – the power of choice.  The fact that you’re making it up gives you a  wondrous freedom.  If you don’t like something, you can “make it up” in a different way – a way that makes you happier, more peaceful, balanced, loving, etc.

If you look and contemplate, you will see how much of every situation, every person, every experience you have in a day is simply one tiny opinion (out of the many, many possibilities).  It’s not an unalterable “fact”.

As an example, a lot of what causes stress or inner conflict in people’s lives has to do with the other people in their lives (or so they think).  We get our feathers ruffled by our spouse, our children, or co-workers, our friends, the “rude” cashier at the corner store, etc.  We get angry or sad or frustrated, or we get happy because of someone else.  I won’t cover the positive emotions, because if you think someone else has made you happy, well, there’s really no problem.  (My thought is that no one can make you happy or sad or angry or anything else.  You do that yourself). 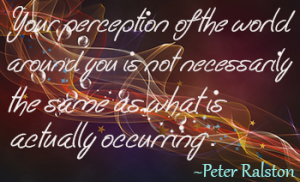 But to continue with the people example, I’ll use one of my own experiences to illustrate.  The man I married did a lot of things that I felt caused me (and others) great pain.  He kidnapped my kids and took them to a third world country, and as a result, they had to grow up without a mother near them.  The absence of my kids affected me greatly.  For a year, I could barely get out of bed.  Seeing another parent with their child sent me into an emotional breakdown for a long time, so much so that I quit going to stores and places where I would encounter such experiences.  When we were married, he hit me, and he hit my kids.  He said mean and hateful things.  I have a long list of why he is a “bad person” and why I am justified in hating him or being angry at him or all the other negative emotions.

I did many things myself to generate the years of angst, turmoil, despair, pain, anger, and hatred I felt, emotions that impacted every area of my life for a long time.  First, I focused on all the bad things he did.  Seriously, I could not come up with one good quality in him.  But you know what?  There are people who like him.  They see qualities I don’t even see.  Everyone has good qualities and bad.   What you notice and what you focus on forms part of your story – what you’re “making up”.

Then I made lots of stories in my head, stories about why he acted a certain way (“He’s evil”, “He doesn’t care about anybody but himself”, etc).  But how can we know why another person acts the way they do unless they explicitly tell us?  We guess.  We make up a story.  We assume things.  And the stories I made up caused me to feel hatred and a bunch of other feelings I didn’t want to feel.

Also, there’s the fact that I am one tiny speck here in an enormous universe.  From my perspective, I can’t see the whole picture.  I see a tiny, tiny part of the whole.  So how is what I see or believe or think an unalterable fact?  It is not. Not only am I looking from a small vantage point in space, I am only seeing things from a tiny point in time.  If I expand the time frame and look back on it 30 or 70 or however many years in the future, I might see it in a whole different way. 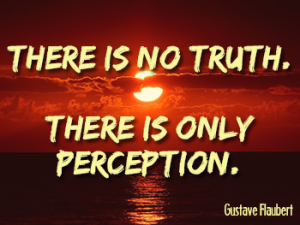 Furthermore, there were my previous experiences that came into play. I grew up in a house where I got hit everyday with something – a pan, a belt, a book, or anything within reach. So when this man hit me, I was flooded with memories and lots of negative feelings from all the bad times I experienced as a child. So if he grabbed me by my hair, I remembered the time my mother grabbed me by my hair and shoved my head in the toilet, holding me under the water until I just knew I was going to drown and die. Even though he just grabbed me by my hair, it became a bigger negative event to me because of the events and feelings I associated with it. If I hadn’t made a big deal out of it, maybe it would have just been a negative event that I let go of soon after it happened, without being a big event that I hung on to and remembered and stewed about for years. (And I’m not saying it’s okay to grab someone by their hair!)

Finally, my mood played a large part in how I saw him. He cut me off from friends and family, kept my mail from me, wouldn’t let me talk on the phone to friends, wouldn’t let me leave the house, etc. As a result, I grew despondent, often overwhelmed with feelings of loneliness, despair, depression, etc. So all the events that happened were colored by my already-present mood. How many times have you walked into a store in a bad mood and suddenly, everybody and everything gets on your nerves and bothers you? Was it the people and events? No. If you walked in feeling on top of the world, no one could bother you and you wouldn’t hang on to the thoughts and events that occurred there. They’d come and go and you wouldn’t think twice about it later.

Let me explain what I mean when I say you “hang on to things and make a story about them”. Say you take a 30-minute drive in the country. As you drive, you pass countless trees, telephone poles, houses, etc. But you don’t focus on them. Instead, your body senses them (usually just sees them), but you don’t hold on to the thought or focus your attention there, so the thought quickly passes through and is forgotten. You don’t get to the end of your drive and say, “I passed so many oak trees and a lot of maples, too”. To hold onto something, you have to focus on it and make up a story about it. Say there was an old, interesting mansion you passed and it caught your attention. You focused on it, then you made a judgement (“What a beautiful piece of architecture that is. The owners should paint that and fix it up”). If you fulfill those requirements, chances are you’ll hang on to the thought so you can talk about it later. Sensory data floods you at all times. You choose what to focus on and keep around for later. 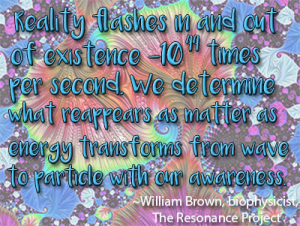 Also understand how thoughts, beliefs, and expectations determine your reality. In 1909, Geoffrey Ingram Taylor proved this beyond a shadow of a doubt with an experiment called the double slit experiment. They found that the determining factor of the behavior of energy (‘particles’) at the quantum level is the awareness of the observer.

For example: under the same conditions, sometimes electrons would act like particles, and then at other times they would switch to acting like waves, because it was completely dependent on what the observer expected was going to happen. Whatever the observed believed would occur is what the quantum field did.

The quantum world is waiting for us to make a decision so that it knows how to behave. That is why quantum physicists have such difficulties explaining the quantum world. We are truly, in every sense of the word, masters of creation because we decide what manifests out of the field of all-possibility and into form.

Utilize Your Freedom of Choice

Things happen. Oftentimes, you cannot change other people, events, or situations. You could spend years trying, just to end up exhausted and frustrated. But you do have the power to change how you experience the world around you, the thoughts you think, the beliefs you hold to be true, and the way you feel. Here’s some tips to get you started on a path to being happy, contented, peaceful, or loving, regardless of what happens “out there”.

Know That It’s All A Matter of Perception

What do you think? Share your thoughts in the comments below.

You Can Be Happy Right This Minute, No Matter What

Embodied Cognition Psychology: Use Your Body to Change Your Mind

The Power of Your Word