I’ve spoken a lot on this blog about the benefits of changing your mind (thoughts, beliefs, etc) to improve your physical body, your relationships, your experience of the world, and your life in general. One way to help you change your thinking is by using your body and environment. Here we’ll look at what research has shown in the fields of embodied cognition psychology, and a subset of it called enclothed cognition psychology. Let’s look at what they are and how you can use these insights to help you change your mind. 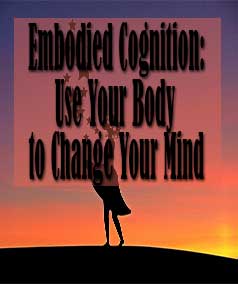 What is Embodied Cognition Psychology?

The prevailing view of science over the last couple hundred years involves the idea that the brain is the “control center” of the body – sitting there outputting commands – and that the mind and body are separate, distinct entities. This theory of “dualism” was embraced by Rene Descartes in the 17th century, and it was popularly held by most mainstream scientists until only recently.

There is a great difference between mind and body, inasmuch as body is by nature always divisible, and the mind is entirely indivisible… the mind or soul of man is entirely different from the body.

Embodied cognition, however, opposes that view. It is a theory that began in the beginning of the 20th century (Martin Heidegger and John Dewey), but has only been really studied in the last few decades. In embodied cognition, the idea is that the body and mind are connected, and our bodies and the environment can influence or even determine our thoughts and beliefs. So it’s not that the brain is sitting there spitting out orders and directing everything. Rather, sometimes the actions of our bodies determine what we think, feel, and believe. It can go both ways.

Examples of Embodied Cognition in the Literature

To understand embodied cognition better, it’s helpful to look at a few examples of it that have been published in the scientific literature.

There are a lot more examples, many of them more detailed and complex, but the point is that a physical action of the body influences the way the mind thinks or perceives.

What is Enclothed Cognition?

Here is a video detailing other results from studies about enclothed cognition:

Why This is Useful

To bring about change in your own life and in the world around you, you first need to change your thinking. A change in thinking leads to changes in behavior, and it’s these actions which bring about the change we experience in our little personal worlds. So then the question becomes, “What is an effective way to change my thinking?” Of course, we have the option of gaining new knowledge or accumulating new evidence that supports new beliefs. So one more tool in your arsenal to bring about change in your world comes from these studies on emotional cognition (and its subset, clothed cognition).

Knowing that your body, your physical actions, and your environment can influence the way you think and perceive simply brings you new ways to set yourself up for success. Just as a small example, say you’re a chronic worrier who spends most of the time ruminating about the future. Studies in emotional cognition show that people who lean back slightly are more apt to think about the past, while those who think about the future tend to lean forward slightly. You are trying to stop thinking about the future all the time, so you could purposely remind yourself to lean backwards throughout the day to help yourself reach the goal you’ve set for yourself. Use your body to influence your mind. 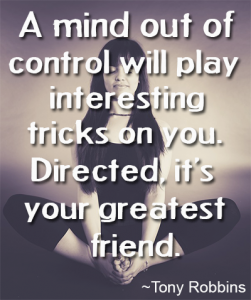 Motivational speaker Tony Robbins talks a lot about using your physiology to influence your thinking and your feelings. For example, say you feel rather down and depressed. He illustrates that you can change your physiology to life your mood. Look upwards instead of looking down. Instead of slumping your shoulders, square them and sit or stand up straight. Take deep breaths. Smile. Don’t speak in a slow, monotone voice. Instead, vary your pitch, gesture with your hands and face, as a passionate person would speak. Quicken the pace at which you speak and move. Walk as if you’re on a mission. Your thoughts and mood will follow the actions set forth by your body.

What do you think? Have you ever noticed how your physical actions influence your thinking? What about your clothes – do you notice that you think and act differently when you’re wearing old sweatpants with a raggedy T-shirt than when you’re all dressed up? Share your thoughts in the comments below.

Mind Over Matter: Our Mind’s Amazing Abilities to Control Physiology

Experiment: Change Your Beliefs For One Week