Some people don’t believe stories of near-death experiences, but I find them fascinating.  When the experience leads to complete changes in the experiencer’s outlook on life or behavior, I am intrigued enough to learn what they’ve learned.  Anita Moorjani’s NDE and subsequent healing from end-stage lymphoma is fascinating, and I think everyone can learn something from her message. 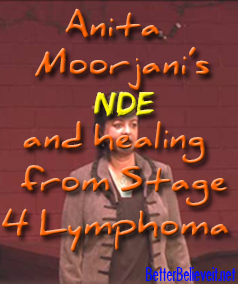 Anita Moorjani was born in Singapore to Indian parents. When she was two, Anita moved to Hong Kong where she grew up speaking English, Cantonese and Sindhi, an Indian dialect. In April of 2002, Anita was diagnosed with cancer (Hodgkin’s Lymphoma). Over the course of 4 years, the cancer grew and spread until she got to what doctors said was “just a few hours to live”.  She had lemon-sized tumors all over, she couldn’t walk, her lungs were filling with fluid and she couldn’t breathe without oxygen.  Her organs were all failing and she slipped into a coma.

Then, she had a near-death experience, which is fully detailed in her book, Dying to be Me.  She was given the choice to come back, and since she had learned many things about her illness and life, she opted to return to her body.  Within 3 weeks after returning and waking up, Anita was cancer-free.

What touched me the most about her story was when she said that fear caused her cancer, and lack of fear, or love healed her.  I’ve had a difficult journey dealing with fear in my own life.  Like Anita, I had a huge fear of cancer.  Other fears also plagued me, and I see the far-reaching effects that fear plays in other people and in this world.  Anita had 5 lessons to teach people about what she learned from her experience (see the video above).  But the effects of fear on our bodies and on our world intrigued me the most.

Getting over the habit of fear isn’t easy.  But if you’re interested in a good book that offers a practical solution(s), read The Fear Cure: Cultivating Courage as Medicine for the Body, Mind, and Soul by Lissa Rankin, M.D.

The fact that Anita was at the end-stage of a 4-year battle with cancer and yet had an experience which led her to completely rid her body of cancer within three weeks leaves me to believe that she truly learned something, and that something not only healed her incurable, tumor-ridden body, but also that her message can help each one of us in our own lives, as well.

A Case of Healing Through Belief: Shanghai China